Sheela Silverman, whose crimes are at the center of “Wild Wild Country” – a documentary on the revolutionary communal city in Oregon, USA in the 1980’s – is now being presented in a new Netflix documentary, produced by film director, Karan Johar, “Searching for Sheela” based on footage of a recent visit to India.

As the executive producer, Shakun Batra explains, “This is not an investigative piece, just an observation of a person who has had a questionable past and has always lived life on her own terms.”

This statement, covered widely in the Indian press, speaks volumes, both about the producers (who are intrigued by Sheela rather than by Osho) and about the subject of the film itself.

That “questionable past” involves literally hundreds of state and federal felonies from conspiracies to murder a US Federal Attorney and attempted murder, to poisoning of public officials and many members of the public, to burglary, arson, assault and mass wiretapping. Sheela received multiple 20-year sentences but, strangely, served only 39 months.

A review of the lies she told in this program gives a more accurate flavor of the real Sheela that the producers claim to be “searching for”:

1.    Sheela denied “admitting attempted murder.” In fact, Sheela pled guilty to the attempted murder of Osho’s personal physician. Sheela also pled guilty in a Swiss court of “criminal acts preparatory to the commission of murder” in relation to a plot to kill US federal prosecutor Charles Turner in 1985.

3.    Sheela denied wiretapping, claiming that she had bugged Osho’s room with his consent for his security. In fact, Sheela pled guilty to a massive wiretapping scheme including all public telephones on the ranch as well as many telephones used by Ranch residents.

4.    Sheela denied “poisoning a town.” In fact, Sheela pled guilty to poisoning salad bars and restaurants in the Dalles Oregon preparatory to executing a plan to poison the town water supply on election day.

5.    In response to a long question, Sheela stated “I have not committed a crime, okay.” In fact, in addition to the crimes discussed above Sheela pled guilty to the poisoning and assault of two Wasco County public officials, burglary and arson of public offices.

6.    In response to a question about Osho’s comments about her, Sheela stated “He was doing drugs that make you depressed (and cause) schizophrenia.”

As we watch the shattering of any sense of “community” in today’s world, it is already clear that her greatest crime is that these stupid criminalities gave the US authorities exactly the opportunity they needed to destroy the most amazing experiment in communal living in modern times. In addition, it provided the US fundamentalists the chance to smear Osho with her criminality. Hidden in the footnotes only is their official admission that there was no evidence of this at all.

Instead of any serious investigation of this individual, the advance publicity and clips featured in the trailer invites us to enjoy Sheela as a celebrity in her own right, whose dark past only adds glamor and titillation to the story. It appears that the producers even arranged her “return to India” tour so they could document the drama of it. The whole story fits a pattern. It seems that she has learned nothing and clearly has not changed.

The day after Sheela and her closest lieutenants fled the city to escape the inevitable, Osho exposes the real Sheela that this documentary claims to be searching for. Here, Osho is referring to Sheela’s reaction when suddenly, after three years of silence, Osho begins to once again speak publicly. It was during this period of silence when she used his authority to glorify herself, even making herself the “pope” of a religion she invented in his name – someone who had spent decades excoriating the very concept of the religions!

“I sent a message to her that, ‘See the point. Where has the excitement gone? The excitement was not being with me, with the commune, creating a new way of life, hoping for a new man to arrive. That was not your real excitement. Your real excitement was becoming a celebrity – on the television, on the radio, in the magazines, in the newspapers. You enjoyed your name, your photograph; now this will not be possible. I am speaking myself. I am speaking to the whole world press. And certainly you cannot represent me.’…

“She did not even respond to my message. On the contrary, she collected the bunch of people that she has placed in important places. Now the sadness was turning into revengefulness. The idea was that all these people will go with her, and the commune will be in a chaos.”

You can watch more of Osho exposing Sheela’s personality and her ugly behavior in the videos linked below.

If the film is called by the producers “Searching for Sheela” – we have found her. And if these so-called documentary film producers are not able to conduct a basic investigation but rather are happy to whitewash a criminal who continues to spread lies and fake news, the OSHOTIMES offers here excerpts from of a new book, with a whole chapter devoted to that criminal – coincidentally released at this time. The book includes links to extensive documentation of all the topics covered, and is summarized as follows:

The book presents incontrovertible documentation and the applicable law proving the US Government’s illegal program to get Osho out of the US and destroy his Community in Central Oregon, shows that the federal government misused the immigration laws, that the State of Oregon misused the constitutional requirement of the separation of Church and State, and that an Oregon land use “watchdog” group misused the Oregon land use laws. All in a pervasive atmosphere of bias and hostility.

The OSHO TIMES provides here excerpts from Part 4, a chapter about Sheela and her crimes.

Introduction and Summary. On September 14, 1985, Sheela resigned her positions, left the Ranch and fled the United States, accompanied by those mostly closely involved in her criminal activity. Shortly after her departure, Osho was told of Sheela’s crimes. Osho immediately had the Community called together for a meeting, reported Sheela’s crimes, and invited the US government to investigate and prosecute those crimes.

State and federal law enforcement immediately undertook investigations based on Osho’s reports. Sheela and her coterie were charged by the State of Oregon with poisoning, burglary, arson, assault, and attempted murder. After being extradited from Germany, Sheela’s attorney negotiated a guilty plea to all of the above charges. The federal authorities charged Sheela with a massive scheme of wiretapping, poisoning, and multiple violations of the immigration laws, primarily arranging “fraudulent” marriages. Sheela pled guilty to those charges as well. The federal government also alleged that Sheela conspired to murder Charles Turner, the US Attorney for Oregon, but that charge was not within the 1986 guilty plea. The Turner murder conspiracy charge was later prosecuted by a unit of the US Justice Department, which filed a complaint. Extradition from Switzerland, where Sheela then resided, was refused by the Swiss courts. Sheela was later charged and convicted in Switzerland in 1999 of a similar crime, based on evidence provided by the US. Department of Justice, an extremely unusual circumstance, but was sentenced only to time served.

Sheela’s actions and attitude severely damaged the Community on multiple levels. Her aggressive, ill-considered and egoistic attempts to defend against the very real threats from the politicians and government agencies actually played into the government’s hands, giving substantial ammunition and cover to the government in the immigration, land-use, and Church/State cases.

Sheela’s hyper-aggressive approach inflamed already negative public opinion against the Community. Her criminal actions, when they became public knowledge after she left the US, provided justification for the public attitude and cover for the governmental hostility. In sum, Sheela provided: (1) a smokescreen behind which the prejudiced, illegal, and unconstitutional nature of the prosecutions was hidden; and (2) evidentiary support for the governmental attacks.

After Sheela’s guilty pleas in the state and federal cases, and with no criminal charges filed or prosecuted against Osho, the press and public inquired why the “big fish” had gotten away. The federal and state prosecutors had to publicly acknowledge that they did not have evidence to support a prosecution of Osho. The prosecutors defended themselves by trumpeting their destruction of the Community.

The prosecutors, politicians and the public generally assumed Osho and the Community were all involved in and responsible for the criminal activity. This bias flew in the face of the lack of evidence of Osho’s knowledge or involvement, and the fundamental fact that fewer than 10 members of Community members were charged with any participation in Sheela’s criminal schemes. The bias also disregarded the fact that many of the most serious crimes, including the attempted murder of Osho’s physician and the wiretapping scheme, were directed against Community members. 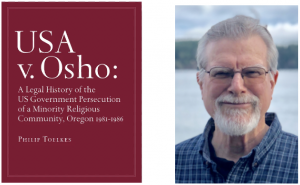 Summary from the Author:

Sheela Silverman pled guilty in Oregon to literally hundreds of state and federal felonies from murder conspiracies and attempted murder, to poisoning of public officials, and many members of the public, to burglary, arson, assault and mass wiretapping. Sheela received multiple 20-year sentences but served only five years.

When Sheela pled guilty, the prosecutors publicly acknowledged that they had no evidence to charge Osho for participating in Sheela’s crimes.

Sheela was aided in crimes by a small group. Many of the most serious crimes were against her own Community, such as the attempted murder of Osho’s personal physician and the massive wiretapping scheme. Sheela even bugged Osho’s private rooms.

Shortly after Osho was told of Sheela’s crimes, he immediately had the Community called together for a meeting, reported Sheela’s crimes, and invited the U.S. government to investigate and prosecute those crimes.

After Sheela was released from prison and deported, the US Justice Department sought to have her extradited to be tried for the conspiracy to murder US Attorney Charles Turner. Sheela evaded extradition from Switzerland but was convicted in 1999 based on evidence provided by US government.

2 min read You are not here for meditation. Here, too, you are a power seeker. Some kind of management is necessary; it is functional. These people are managing humbly – nobody is arrogant, nobody is trying to dominate. ...It is simply your ego, drop it.

11 min read The Award Winning Documentary ‘Wild Wild Country’ was at the Center of a Copyright Infringement Case filed in Federal Court in Los Angeles, CA. The matter has been resolved, OIF’s attorneys dismissed the case. All six episodes include now updated credits.

Abuse of Power: Trump in the Dock – the USA on Trial

6 min read Abuse of power: You have seen the President of the US and his understanding of power, summarized below. You can...

When the Shoe Fits, the Foot Is Forgotten

2 min read At the airport check-in counter, a VIP was yelling at the gate guard, ” How dare you to stop me?...

The Humble Wants to Be on the Side of Truth, the Egotist Wants the Truth to Be on His Side

3 min read Osho, When you were talking about the way that different Buddhist masters have been adding their own flavor to Buddha’s...

It Is The Ego Which Feels Jealous

3 min read Jealous Love Is Not Love “Love cannot be learned, it cannot be cultivated. A cultivated love would not be love...